Summer 2006: I go on my first writing marathon, with Jeff Grinvalds and facilitator Michelle Rogge-Gannon (Director of the Dakota Writing Project) at the NWP Writing and Technology Professional Writing Retreat in Nebraska City. We also meet Natasha Whitton, Tech Liaison for the Southeastern Louisiana Writing Project, where the writing marathon was born in 1994. It’s simple. Powerful. Fun. I can’t wait to bring it back to the Nebraska Writing Project.

Fall 2006: With Robert Brooke, Director of the Nebraska Writing Project, I pilot the first NeWP writing marathon, Eye of NeWP, and invite the 2006 Summer Institute participants, the Advisory Board, and Michelle Rogge-Gannon. It’s a bunch of fun. We all want to do more.

April 2007: We plan the Second Writing Marathon in the NeWP, again in Lincoln’s  Haymarket, this time on the Saturday after the Spring Gathering. A small but mighty group of five convenes. 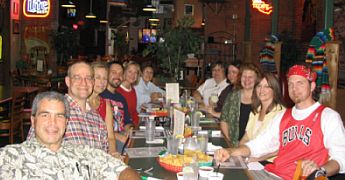 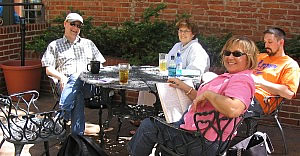 Summer 2007: I go off on my solo writing retreat at Platte River State Park. I keep thinking about how cool it would be to bring a group of NeWP teacher-writers out there for a retreat…

October 2007: We host the third NeWP writing marathon, this one in midtown Lincoln, ranging through the Sunken Gardens and Antelope Park. It concludes at Jeff’s parents’ house, where we bask in Latvian hospitality.

January 2008: The now-traditional Winter Writing Marathon in downtown Lincoln takes shape and starts to attract a larger crowd. We learn that Yia Yia’s is great for pizza and beer and artfully-lit photography, but too loud for read-arounds. 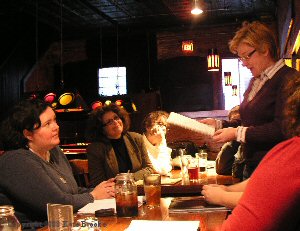 April 2008: Our first Omaha Writing Marathon ranges over the Old Market. This is also our first marathon with young writers! In future invites, we include the line, “Your writing-friendly family and friends are welcome to join us.” It’s a good thing.  I still use that line on all of my flyers today.

September 2008: We roll the fall writing marathon into the first Platte River Writing Retreat and end up reading by candlelight after an outrageous potluck. An awesome start to a new tradition! 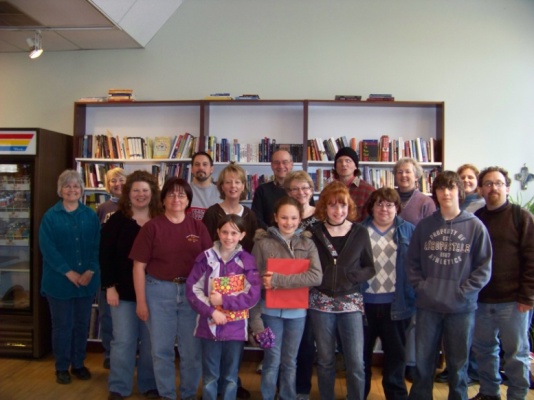 November 2008: At the NWP Annual Meeting in NYC, I get to go on my first NWP-sponsored writing marathon, with Sharon Bishop and some upstate NY TCs. I meet writing marathon founder, Richard Louth (Director of the Southeastern Louisiana Writing Project), and join 200+ writing teachers as they flood into the NYC subway system, heading for Greenwich Village.

March 2009: I write my first writing marathon fan letter. Richard Louth succumbs to my gushing and agrees to meet with me in New Orleans. He and his wife shower me with books, New Orleans tips, and lots of support for my work. We realize that SLWP and NeWP are sister sites, both with long histories of valuing teachers as writers.

January 2009: We hold our second Winter Writing Marathon in downtown Lincoln. We have learned our lesson from Yia Yia’s and hold this read-around at Misty’s.

April 2009: Our first writing marathon held “out west.” Sharon Bishop hosts this one at the Stuhr Museum, and we get to write in a Pawnee Earth Lodge!  Awesome.

Fall 2009: We’re back at Platte River State Park for another great retreat and another great marathon. Lucy Carruthers writes a feature story about it showcasing gnomes and bees. Robert and Kate write in a paddleboat with Pan. More kids come. More campfire awesomeness ensues. 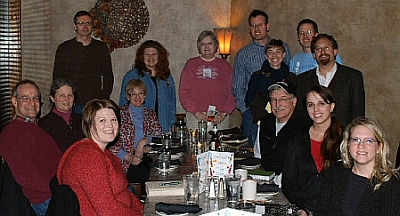 November 2009: Anne, Mary, and I make it to the NWP Writing Marathon in Philadelphia. Richard reads the Hemingway quote and I swoon. We write and wander and watch people throw pennies on Ben Franklin’s grave. I start to realize that writing marathons change the way writers interact with the people they encounter.

January 2010: The third Winter Writing Marathon draws a record crowd of 23. After a strange start at Sheldon Art Museum on the University of Nebraska-Lincoln Campus, we’re off on the coffee-and-art tour of the city, then back at Misty’s for the read-around. Jen Stastny does her “big arms” Eddie Izzard bit as we cross P Street.

April 2010: Our first Riding/Writing Marathon in NoDo (North Downtown) Omaha. We have a great launch by the Omaha Writing Group at the Hot Shops Art Gallery and a read-around right back there. This was one picturesque, sunlit marathon! 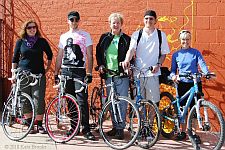 March 2010: At CCCC in Louisville, I present a paper about writing marathons and ecocritical notions of “spirit of place.” I’m on a panel chaired by Robert Brooke about writing marathons with Richard Louth and Natasha Whitton, from the Southeastern Louisiana Writing Project, and Marjorie Roemer from the Rhode Island Writing Project. . No one thinks to take a picture of the panelists, but everyone is loves this slide with the John Muir quote I got from Jeff Lacey: “I only went out for a walk, and finally concluded to stay out until sundown, for going out, I found, was really going in.”

July 2010: We do an optional writing marathon during the Professional Writing Retreat at St. Benedict’s Retreat Center in Schuyler, Nebraska, with c0-facilitators Robert Petrone and Jane Connealy.  I write a cheeky sequence about “What writers need,” “What St. Benedict needs,” and “What the world needs.”

September 2010: Returning again to Platte River for Writing Retreat and Marathon #3. By now we’ve several got several emerging traditions and themes, including a Quilt Show, an Angry Cardinal Clan, and a Write about Found Stuff Ritual. 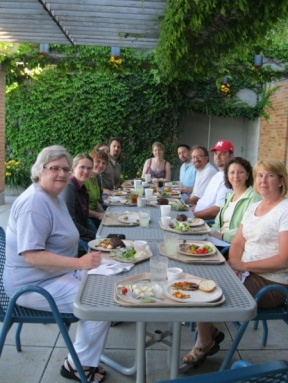 November 2010: I organize a Rogue Writing Marathon at Downtown Disney during NCTE. Richard and Natasha come from SLWP, along with the fantastic Michelle Russo.  we are also joined by  Gigi and Wilma and other folks from the Oxbow Writing Project.  This is the start of our “go rogue” option when we want to have a writing marathon but it doesn’t fit into the official program (we revived this at the Annual Meeting in Washington, D.C., in 2014). 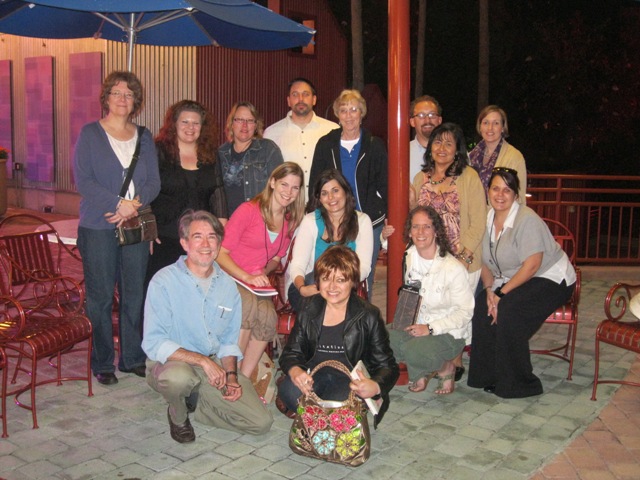 In 2011, I started this blog, so the story continues back at the beginning.  In August of 2013, I became Director of the Prairie Lands Writing Project at Missouri Western State University in St. Joseph, Missouri– a site with a long history of writing marathons where it was easy to continue my research and my work, spreading marathon joy to the masses.  I am fortunate, indeed!

Many thanks to my Teaching Writing with Technology classes at MWSU and the great teacher-writers in them who help inspire me to keep writing–digitally and otherwise.  Here is the latest group, on a class marathon in downtown Saint Joseph in March of 2016, beholding the magic of the s’mores pizza at GeneO’s: