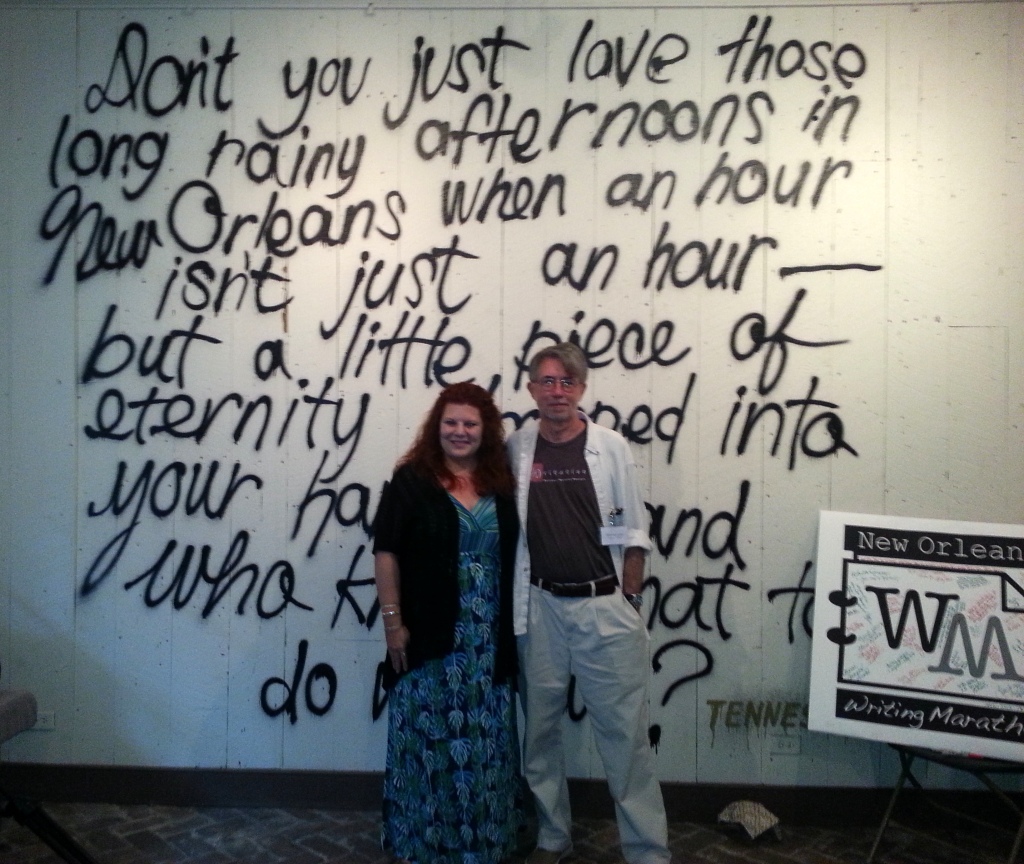 The wall in from of us in the Gallier House meeting room reads, “Don’t you just love those long rainy afternoons in New Orleans when an hour isn’t just an hour but a little piece of eternity dropped into your hands—and who knows what to do with it? –Tennessee Williams”

In the opening session, our writer-in-residence for the retreat, Kim Stafford, quotes the Leonard Cohen line, “There’s a crack in everything.  That’s how the light gets in.”  It will resonate with me for days until the last full day of the marathon, when I give myself over to it.

Kim tells us about his adventures so far this trip in New Orleans, his experiences with people and places. He talks about getting “really deep, really soon” because that’s how New Orleans works.  He passes on some advice from one of his own writing teachers:  “Lower your standards, and then keep going.”

Kelly and I leave the Gallier House and walk, starving, hoping to find the famous Irene’s Cuisine but missing it somehow but ending up at Coop’s which, miraculously, isn’t crowded.  We share smoked duck quesadillas, and I order the tasso and crawfish pasta, which I love.  We drink and talk and wander down Decatur Street, enjoying  Le Richelieu’s magic courtyard before heading up to bed.  All around and above us, room lights glow dim with writers sitting up too late.  It has begun. 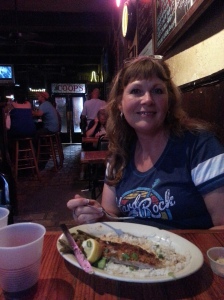 In the morning, Kim leads us in several potent writing exercises and ideas start to tumble.   He reminds us that this retreat is “a time out of time.”  I begin thinking about the “veil between the worlds” –the imaginary line between the past and the present, the real and the imagined, the tangible and in the intangible.  It’s a generally accepted notion that the veil is very, very thin in New Orleans, thinnest of all in the French Quarter.  A gossamer nightgown on a shapely silhouette. Dangerously thin.

He challenges us to write a very long sentence and forbids semicolons.  I write,

She sat on the balcony just one room over from where her last relationship had met its end— not its technical end, where she finally said, out loud, “we’re done,” but rather the first glimmer that she was, in fact, not at the turning point and not on the  downward slope and not even that she had been there for some time but rather a sinking awareness that there had never really been a slope or even a trajectory  in the first place but only a long, slow drift out to sea in the mist, moving farther and farther away from herself.

When it’s time to head out, I’m torn.  I want to go everywhere.  Across the river to Algiers with Jeanne.  To Antoine’s  with Michelle.  To the garden district with Ellen.  Then  Annabel comes at me with her blue eyes like diamonds and says, “Come with us.  Come with us to Harry’s.” And of course I do.

A beautiful sweet rum syrup to coat my writer’s guts. It tastes like the tropics, with touches of bitter plantation histories at the edge of the sugar. Again, Harry’s Bar, and gorgeous Annabel with her amber rings singing to the sunshine outside.  She’s our marathon priestess for the day, and how lovely.

Perfect Harry’s, where George Dorrill baptized me in the afternoon rain two years ago, sitting exactly here on our first marathon stop of that first day.  Following his example,  I went straight to the jukebox, starting us off with Janis Joplin. Take another little piece of my heart, why don’t ya?

Three cool, young friends have taken up the bar stools across from us, and so far they approve of my music choices. Van Morrison’s “Sweet Thing” makes me cry, almost.  Tears will be a given here in this potent city. I can feel them in the edge of my throat, caught there this morning already when Richard read the Hemingway quote and Brant said, “Amen.”

And now it’s “Crazy,” by Patsy Cline. And a case of Maker’s Mark is being dropped off just in time around the side of the bar.

Each marathon stop from here on out is a whole day unto itself.

At Wink’s, the famous Dwight Henry feeds us stuffed peppers with macaroni and cheese AND potato salad with a side serving of his personal philosophy of celebrity. At Café Envie, Randy and I watch each other watching and writing about the same apartment balcony across the street, a place Randy tells me later where he used to live.

At Molly’s on the Market, we run into a dozen other writers passing through at the end of their own marathon ramblings.  We wander away for the open mic and for dinner—Fiorella’s famous fried chicken—then wander back to Molly’s and take up residence at the window seat and trade stories with random passersby on Decatur, everyone and everything glowing in the neon and the humid evening air.  People ask us for directions.  For smokes.  For recommendations.  They smile.  They stop to chat.  Where else do people stop and talk with total strangers like they do here in New Orleans?

We can barely write, it all comes so fast and easy.  Jeff sums it up:

“This window is the shit.”