Our Prairie Lands Writing Project Invitational Summer Institute kicked off in June 2014 with a writing marathon, but it also ended with one.  The teacher-writers who gathered at Missouri Western State University with us for four weeks of their precious summer truly embraced their identities as writers, and they boldly went wherever their writer whims took them.

I was fortunate to be in a group on June 24 with my Institute Co-Facilitators who wrote at Cafe Pony Espresso, the downtown branch of the Saint Joseph Public Library, and then a Neapolitan pizza shop called Il Lazzarone.   On the last marathon, July 24, I crashed another group who was heading to the local DMV– a marathon stop I’d never tried before, and who also sought out the writerly haven of Pony Espresso as well as some stops along the downtown sculpture walk.  Here are two pieces of writing from those two marathons.  You can read more marathons stories from other PLWP Invitational Summer Institute Participants here. 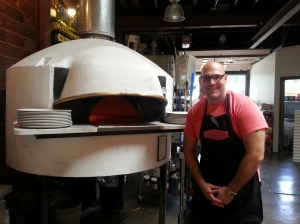 Pizza Superhero Eric
stands proudly beside his imported Italian pizza oven,
invites me back into the prep area to get a picture, and–
I’m sure I’m violating some kind of health code—but I can’t help it.
He’s humble and proud all at once, basking in the lunchtime rush love and
in the heat of flames licking dough into Neapolitan magic.
According to the News-Press, it cost $30,000 just to get the oven from Italy to St. Joseph
Totally worth it from a foodie standpoint, but my writing group worries for him;
restaurants struggle in this scrappy little town.
We resolve to keep bringing Eric and his oven our money and our love,
Hometown pizza superhero,
Eric the Good,
Eric the Brave

We pull up to the scene of the first marathon’s crime, and I can feel some healthy anxiety in the car. I’m a guest in this group, lured by their stories from the first writing marathon and by the faint hint of danger. I turn to Terrance and say, “This is going to be ok, right?”

He smiles and says, “Well, the worst thing that will happen is that we will be arrested. Or maced.”

With this reassurance, we enter. We sit in the long rows of backless brown chairs and get out our notebooks. The place is mostly empty. A woman that Terrance will eventually name She-Ra calls to us in a practiced voice. “Are you here for driver’s license or motor vehicle?”

I explain that we’re teachers who are also writers, working together this summer, and that we’re looking for inspiration.

She-Ra slowly realizes that Deb was her science teacher back in middle school, and they start reconnecting.

About that time, another woman walks by behind the counter and notices us writers. Terrance and Deb recognize her as The Other Deb who questions them during their first marathon visit. She says, “You’re back!”

We all smile. Terrance explains about the quest for inspiration and the reason for our return to the License Office. “We like the feeling,” he says.

We all laugh. The Other Deb says, “Good to see you again.”

We return to our notebooks, scraping away under the watchful but benevolent eyes of the DMV ladies, their patient, daily chant washing over our pens.