Last week I was blessed to finally be able to participate in the mother of all writing marathons, the Advanced Writing Marathon hosted by the Southeastern Louisiana Writing Project every summer in New Orleans.  I was blown away by the writing, the city, and the hospitality of my fellow teacher-writers.  Here’s what I read at two successive read-alouds on July 12th and 13th in the gorgeous VIP suite of Le Richelieu, our home base and hotel in the French Quarter.

We’ve just crossed the Mississippi River on the Canal Street-Algiers ferry, a trip I’ve been wanting to take for years.  So glad to finally be doing it and to have such a great local guide in the wonderful Jeanne.  I’m thinking of the Travelling Willburys’ song that George played on the jukebox yesterday at Harry’s Bar, especially the Tom Petty line, “I’m just happy to be here/Happy to be alive.”

But during the river crossing, all I could think about was the scene in Tremé where the John Goodman character takes his own life by purposefully falling off this very same ferry.  More than the death of a favorite character, it became a symbolic act within the story which represented the overwhelming despair faced by so many after Katrina.

I can’t imagine loss like that, loss and endless grief and anger.  I am a guest in this city, and it has a hold on even me, in a way I can barely explain (though as a writer, it’s my job to try).  I’m overwhelmed by this place and its forgiving spirit in the wake of enduring so much.  New Orleans has every reason to be angry.  To be enraged.  And not just by Katrina, but by all the Katrinas that have come before, the historical and the political, the meteorological and the bureaucratic.

New Orleans has every right to be mad as hell.  But instead it endures.  It thrives and it forgives.  And it smiles.

I can’t begin to unravel how the city does what it does.  So instead I will write about my barbecue shrimp.

I have no idea how it does what it does, either.  I was encouraged but also warned by my benevolent writing group.  And I was given a big pile of napkins.  All my senses have been engulfed by its crunchy, gooey, spicy, buttery awesomeness…

The wind ruffles the pages of my notebook.  Behind us, the levee rises fifteen feet or so above the street, blocking our view of the river but shielding this old neighborhood from floods.

On a writing marathon, our own levees are breached sometimes, the river of words seeping over our defenses and swirling into our ready-or-not pens.  The words flow and the river flows and the tears flow, and they all wash over us.  They wash us.  Maybe not clean, exactly, but cleaner than we were.

On the ferry ride back from Algiers, there was a woman standing along the railing near me. 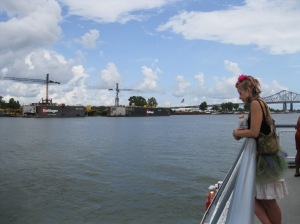 Her pink mohawk-ish hair was tied down with clips and beads and flowers, her skirt slung low on her hips and adorned with a garland of feathers.  Her bare skin was peeking out all over her strappy black t-shirt and cami combo.  She was all by herself, but she was leaning a bit over the side of the ferry, smiling into the wind.  Smiling out at the afternoon rain clouds.  Staring down into the churning, green-brown water and smiling, smiling, smiling.

I can’t thank you enough for your warm hospitality this week, especially for such a motley crew as a bunch of writers.  But, then again, you’ve always been kind to writers.

Yesterday I had my beautiful writing marathon moment with Jeanne and Stephanie and Dee and Pacian and Pete in Algiers.   But I forgot to thank you properly for my perfect New Orleans moment, which came to me as I sat with George and company at Harry’s Bar on Wednesday.  George had expertly steered us into the shelter of Harry’s in perfect time to enjoy the afternoon downpour while we wrote and listened to his $5 worth of jukebox selections.

I have to tell you, after reading The Writing Marathon: In Good Company Revealed, writing at Harry’s Corner Bar with George was like stepping into a famous painting.  Like walking into one of those gorgeous, hazy Monets with the footbridges and the water lilies.

The bar crowd was intensely interested in us writers, especially since another group had stopped there not long before.  They wanted to know what the heck was going on.  Thinking myself clever, I suggested that we were a conspiracy of writers.  The entire row erupted at my mention of “the ‘C’ word.”  One patron grumbled, “We already have too many conspiracies in this town,” and left.

A little later, the video poker player standing near us told his female companion that he was “watching the kids do their homework,” and we were again pulled into a bar-wide conversation about what we were doing.  One red-faced man seemed unable to rest until we fully explained ourselves.  So we gushed for a while about New Orleans as a Mecca for writers, about how people come from all over the country just to write here.  As we spoke, his expression slowly softened and his eyes grew misty and bright.  He told us, “Well, I’m glad y’all are here.  I hope you enjoy yourselves.”   He talked a bit about how friendly people in New Orleans are, how they actually talk to each other and about how they all, mostly, get along.

“I’m just a drunk,” he said, gently taking his leave of us, “but I know a few things.  Good luck with the writing!”  With that, he disappeared out into the wet sunlight.

So much more was happening in that little bar than I could ever possibly write down.  But

in that moment, I finally understood what Hemingway meant by those lines we quote at every writing marathon launch: “The story was writing itself, and I was having a hard time keeping up with it.”

New Orleans, I can’t keep up with you in the least.  And I love that you don’t mind that at all.   I love that you are what you are.  And that you are here for me and for us all.  You’re patient and funny and kind in ways that not everyone understands.  But we writers are working on that.  It’s the least we can do.

If you’re ever up in Nebraska, be sure to give me a call.  I’d love to get together and show you around Omaha.  She’s definitely not you, but she has her moments.

Thanks again, so much, for everything!  I’ll see you soon, I’m sure.