Over Memorial Day weekend, I traveled with a ‎fellow intrepid (and funds-challenged) doctoral student to a conference in Philadelphia.  On the bus.  The Big Grey Dog, Bernice called it, though we found out that Greyhound actually contracts out several of their schedules to other carriers, like Trailways  It was one of those times when we both had more time than money, and bus fare was about $300 less than the plane,  so we bought the tickets and christened ourselves the Grey Dog Adventure Team (GDAT).

When our friends and family found out about our plan, they demanded regular updates to track our whereabouts and our safety (since our sanity was clearly already a lost cause).  I’m not a terribly avid Facebook poster, but this time I saw Facebook status updates as the perfect genre for our purpose, context and audience.  We were headed to a giant nerdfest anyway– the Rhetoric Society of America’s Biennial Conference– so it seemed an appropriate rhetorical strategy.

I’ve compiled the updates here, interspersed with a few choice photos, and I will let them tell the story.  Mostly, it was awful: cramped, exhausting, chaotic, confusing, and malodorous.  I can’t say that I recommend it, especially not for the 65 hours we were either en route or stuck at a station.    But I have to say, there were also moments of real charm and joy.  Friends, if you ever find yourself on a long and sort of scary bus trip, I urge you to take a small pillow, a fleece blanket, a stout heart, and an open mind.

Cheers to all fellow Grey Dog Initiates! And to everyone heading out soon or out there on the road already, safe travels and happy trails!

12:42 p.m. The next driver said, “That guy’s an idiot.” We are now on the local local local getting to Chicago four hours late.  But this driver looks like General Hammond from Stargate SG1, which is reassuring.

3:43 p.m. Dubuque and we lost Turtle Man, who slept a seat behind the Grey Dog Adventure Team by pulling his hands and his head into shirt. Onward!

7:33 p.m.  A great-grandma from Freeport IL told me about the summer of 1956 in Chicago when it was so hot everyone went out and slept in the park. Now Chicago traffic is slowing the GDAT’s progress…

9:56 p.m. I sat with a young man turning 22 tomorrow who was bringing his boyfriend back from Chicago to live in his small hometown. He told me, “You meet a lot of nice people on the bus.” Amen, brother.

11:09 a.m. The much-touted greyhound wi-fi is not very hi fi. Photos soon. For now, GDAT looking good in Penn, though this driver schooled me on improper ticket detachment and read one dude the riot act when said dude was on his cell phone during announcements. Ouch. We miss cool blues-listening driver from yesterday.

8:46 p.m. And so the Grey Dog Adventure Team found redemption this morning in egg and cheese sandwiches and nerdy coffee talk in beautiful Cleveland!

11:56 p.m. Final leg of the trip was grim, but I had a great chat with a Pitt med student. We talked Grey’s Anatomy and student loans.

6:15 p.m. (departing from the Philadelphia station heading to Pittsburgh) Our driver, Daryl, gave the best pre-trip speech yet, letting us all know what was what in no uncertain terms. An accomplished rhetor at the helm of this sleek grey dog! The Philly bus station staff are all pros, too. Great start!

10:42 p.m. Driver Daryl makes a stop for a safety check after expertly piloting grey dog through the storms. He tells us we have ten minutes and can either smoke or run to the bathroom. “Choose wisely,” he says, “and don’t wander off. Because I ain’t gonna come looking for you!” 🙂

4:59 a.m. Our next driver said, “My name IS Earl.” He warned us about taking off our shoes and seemed to enjoy saying “Hotlanta” during his endless repeat of the connecting bus info. Fellow passengers have been doing Earl impressions during the layover in Columbus OH. On to Dayton!

8:51 a.m. (posted by Bernice due to my dying cell phone): Grey dog adventure team survived driver-in-training Cecil but nearly missed the last leg bus.  That would have ended badly for Cecil!

3:00 p.m. Grey Dog Adventure Team befriends a Muslim woman in a hijab travelling alone but also headed to Omaha. She shares her delicious homemade bread with us. We try to give her some chocolate in return. She passes but takes some raisins. For the most part, bus people look out for each other. Grateful GDAT working up some good bus karma

6:15 p.m. GDAT finds itself once again in the hands of Jumpin’ Jack Flash in Burlington, Iowa, and fears for the worst. But this time he is on time and brought along Galaxy Quest for us to watch on the bus DVD player.  Redemption in Des Moines! And almost home…

11:00 a.m.  (the next morning)  Many thanks to everyone for reading and supporting Grey Dog Adventure Team updates! It helped to know that Bernice and I had readers out there wishing us well and watching our progress. We now have a new appreciation for bus travel and a renewed faith in the human spirit, not to mention the kinds of stories that no amount of money can buy. From here on out, when I see clumps of intrepid bus travelers waiting at rest areas, I will smile and tell them the same thing that others in-the-know told us: “Happy trails and safe travels.” 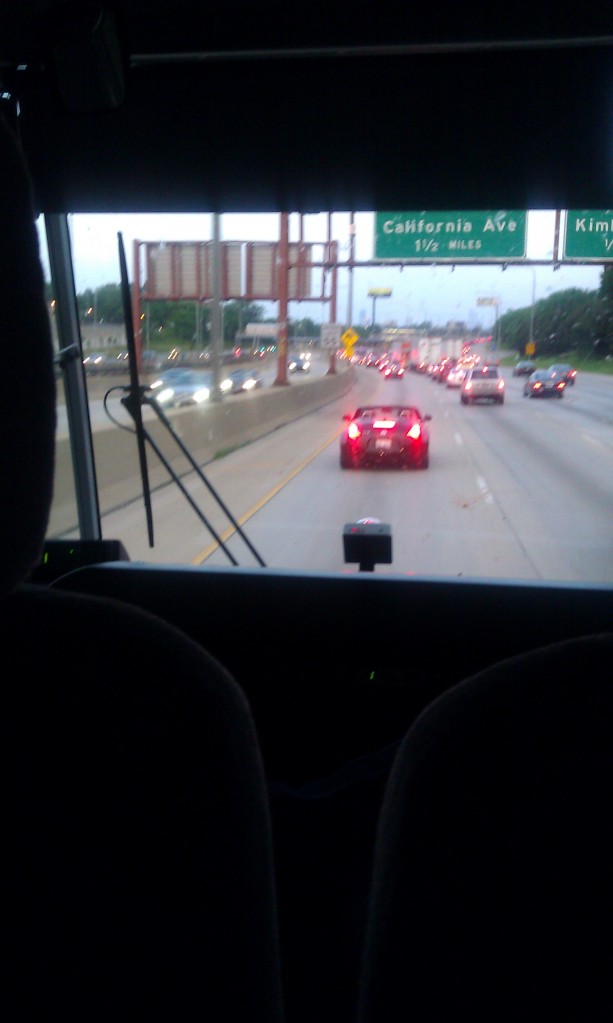